In July I am going to have the huge privilege of cooking in a real Jacobean kitchen at Forty Hall in Enfield.  They have asked me to cook vegetable recipes from the period using food from the allotments on site.  I am very excited about all of this, my family are getting to try out some interesting recipes and anyone reading this page should be warned that there may well be a distinct vegetable theme as I practice recipes to find ones that are safe ( a lot call for raw egg, not happening in my kitchen,) seasonal (a lot use veg that are not in season in the summer) and edible.

My first one is Tortelleti of Green Pease by Robert May.

Robert May wrote his book, "The Accomplisht Cook" in 1660.  He was trained in Paris before the civil war and returned to England after the restoration bringing with him all the fashions of the court in exile.  His book gives a wide range of recipes including ones that would not have been out of place at a medieval feast to the latest fashions in French and Italian cookery.  From the books of Jacobean cookery I have read so far, he gives quite a lot of recipes for vegetables. Only Evelyn's book on salads seems to have more.

"Take pease green or dry, French beans, or garden beans green or dry, boil them tender, and stamp them: strain them through a strainer, and put to them some friend onion chopped small, sugar, sinamon, cloves, pepper, and nutmeg, some grated parmisan, or fat cheese, and some cheese-curds stamped.
The make paste, and make little pasties, boil them in broth, or as beforesaid, and serve them with sugar, cinamon, and grated cheese in a fine clean dish."

This recipe could be interpreted as either a savoury main course where a pinch of sugar and spice brings out the flavour of the peas or you can see the peas as simply a food colouring and bulking agent.  Cooks of the time were proud of being able to produce elaborate desert tarts with many different colours of filling.  In a previous recipe he directs that the pasties be boiled in either strong broth, milk or cream.  I chose to make a savoury version this time.


I like recipes with no quantities, I don't feel like I am cheating when I decide how much to put in!  I must say that I went for 2 handfulls of peas to one medium chopped onion, a handful of grated cheddar, 2 tablespoons of yoghurt (instead of cottage cheese as I didn't have any in) and a small pinch of each of the spices and sugar.

May doesn't give a pastry recipe but in a previous recipe he says to make the paste with hot water.  I used one for Chinese dumplings which is basically flour and water.  I did this because I knew it would work and I have actually learnt how to do it properly.  I am going to try Italian pasta in the future. 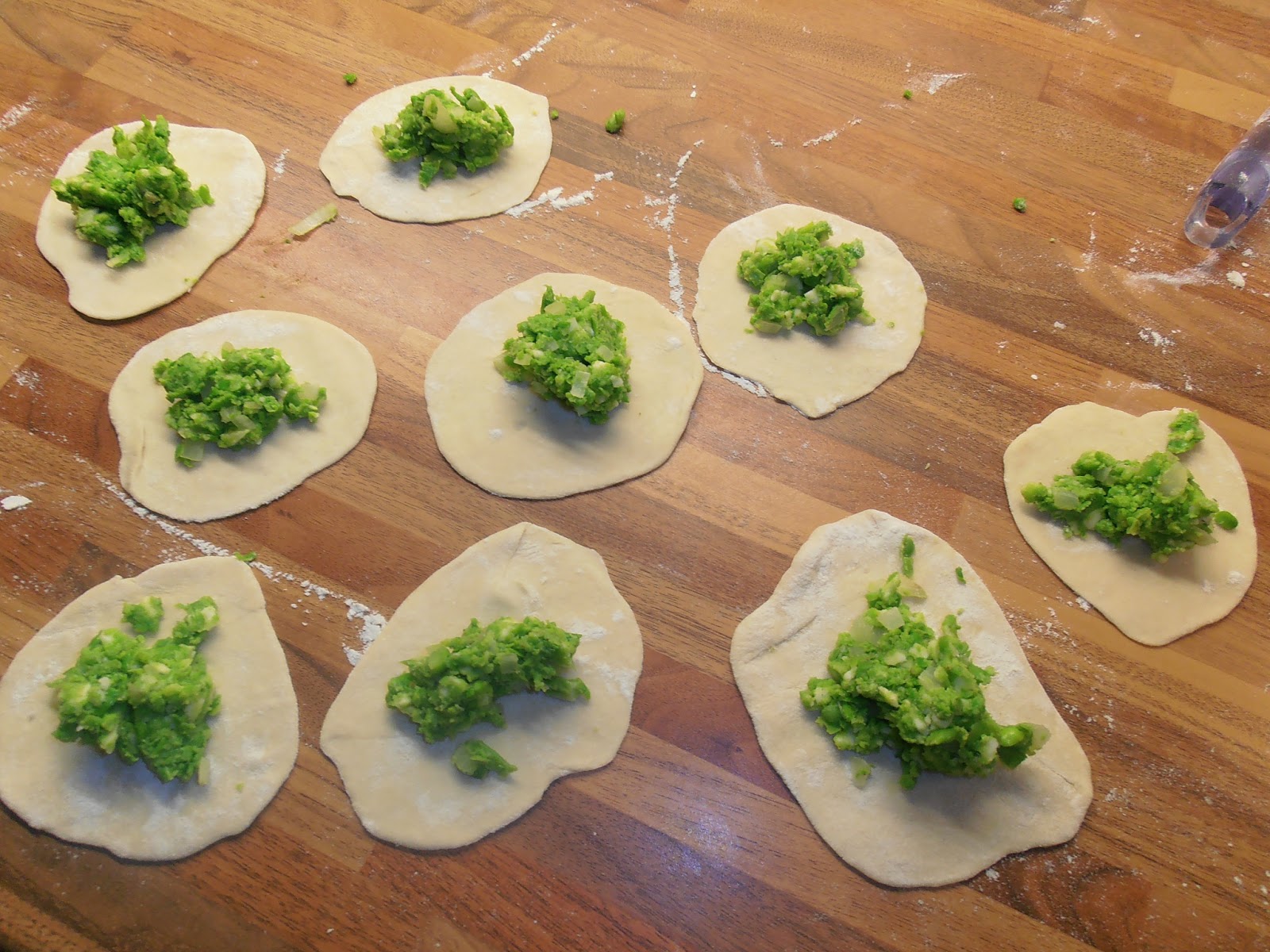 I know these are wobbly looking.  In an earlier recipe for a meat version the author suggested that the cook might like to make the pasties in the shape of stars, fish, rolls or bean and peas.  I have a long way to go, clearly. I think I probably would also need unlimited time and some well trained staff before I manage star
shaped ravioli. 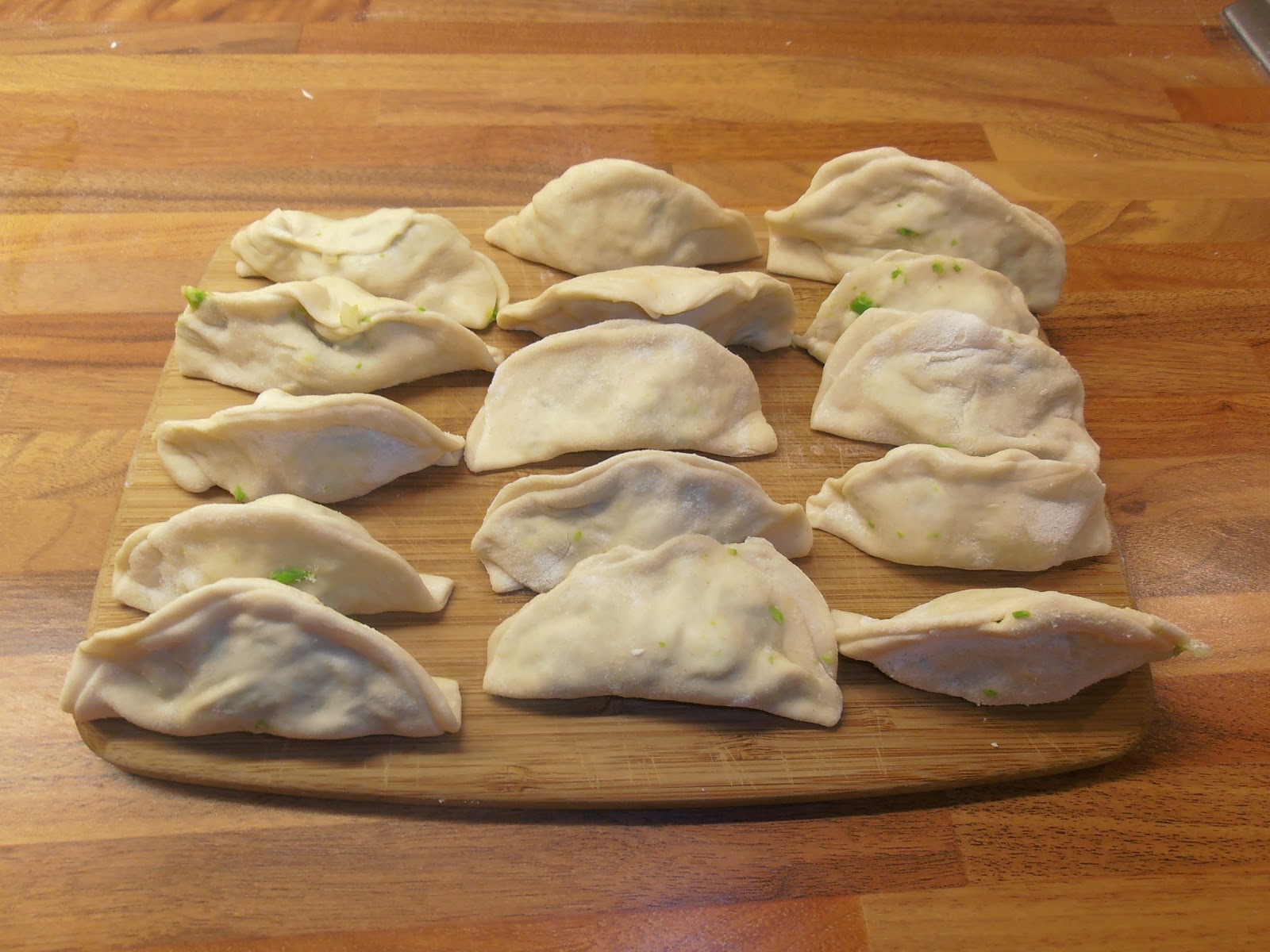 As shapes go these are not that bad for Chinese dumplings.  They may not be even but they didn't leak their filling and in the eyes of my friend Mrs Jao that is pretty important. 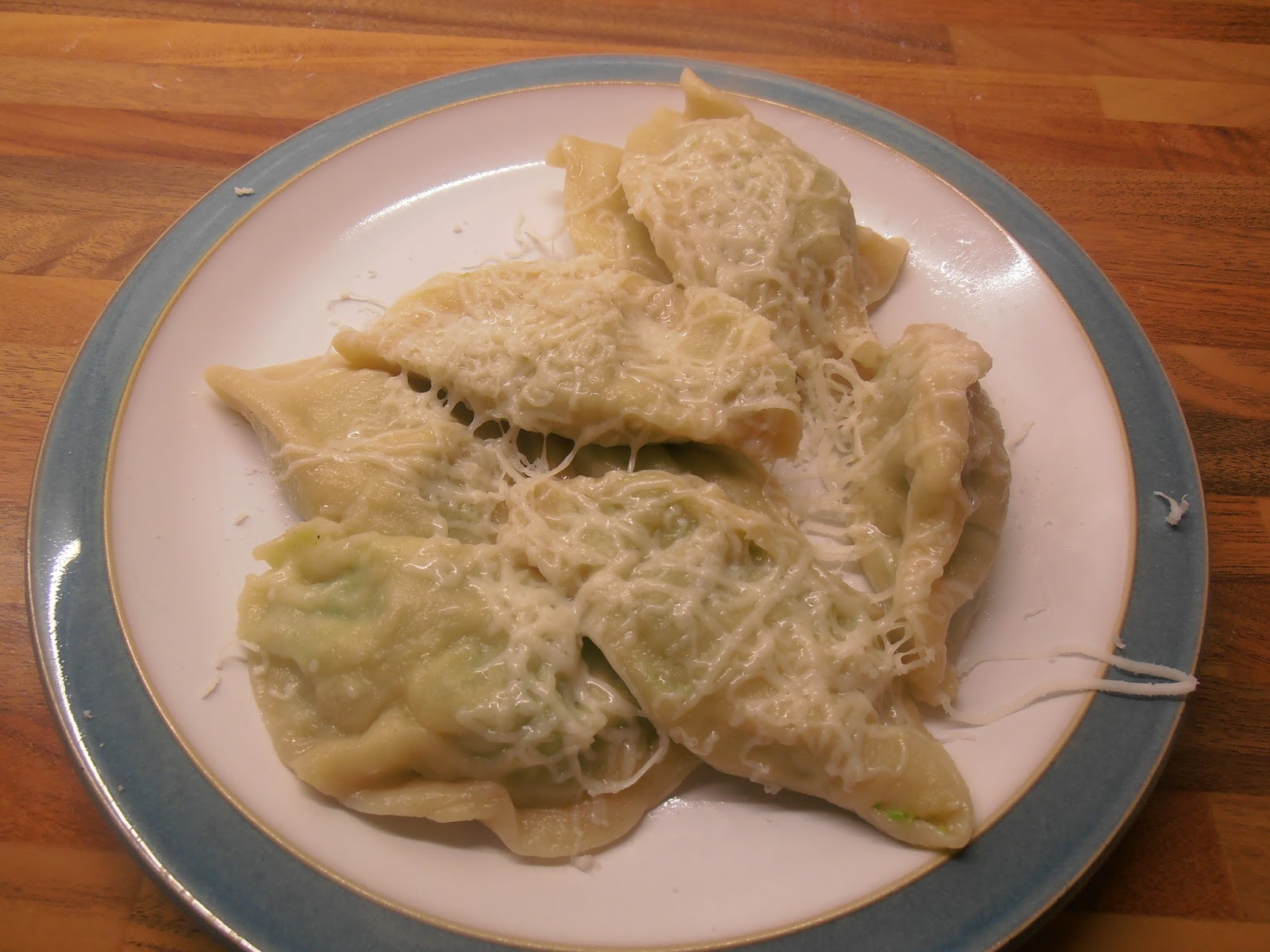 Serving, I have to admit that I left out the sugar and cinnamon and just went for the grated cheese.

You don't need to taste or even read many 17th century recipes to see that our ancestors did not share our distinction between savoury and sweet food.  Many recipes that we would see as main courses are actually quite sweet.  Recipes frequently say that meat or vegetable pies should be served with "great store of sugar strewed over."  Actually, given the hugs amount of hidden sugar in our food today you could argue that the Jacobeans were more honest about their sweet tooth.