I learnt how to make sough dough on a very nice training course at a Yorkshire cafe a few years ago.  Their in house baker (who had previously won baker of the year so really did know what he was talking about) was passionate about pure, natural bread with nothing added and nothing taken away.

He led us through the intricacies of making a rye flour starter, keeping it alive and using it to make some very tasty bread indeed.  Since then I have sucessfully made the starter, kept it going for weeks or months or, more honestly, until I got bored, and used it to make bread.  I followed the precise ingredients and instructions to the letter and it worked very well.

Not once, in all of this did it occur to me how many different ways there are of making sour dough until I started researching historic recipes for earnest.

Now, the more I read the more I realise that there are as many different recipes for sour dough as there are cooks and most of the recipes make it clear that theirs is the best and only way to make it work.

This naturally led to a spot of experimenting.  First up, the leave a bit of dough from the last batch method.  Gervase Markham (1616) advises leaving a bit of your batch of bread, filling it well with salt and using it for your next loaf of bread.  It must be noted that he does include yeast or at least ale balm in the next batch.  Darina Allen of the Ballymaloe cookery school advises leaving some dough in a jam jar in the fridge and using it to flavour your next batch.

I took 2 lots of dough and left one in the fridge, nice and easy.  The other one I mixed with a tablespoon of salt and left in a plastic box in a cool pantry.  I left both of them for about a week. 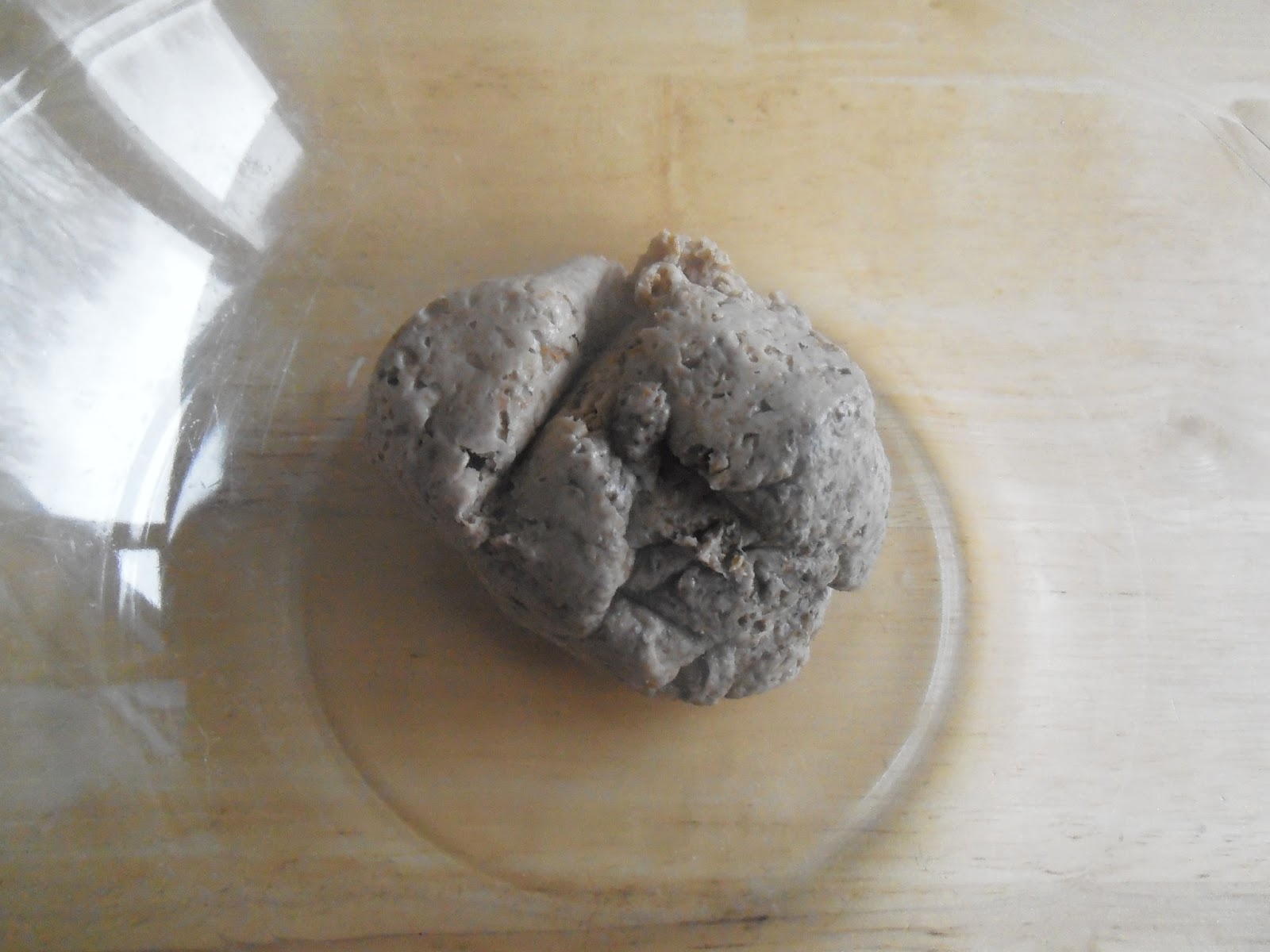 This is the fridge one, it is just a piece of knocked back dough, a bit grey but close up you can see that it has an open texture.  It smelt sour but not bad or off.

Following the modern instructions, I made the weight up to a pound of flour, added a teaspoon of salt and sugar and warm water as if making ordinary bread but without any added yeast. 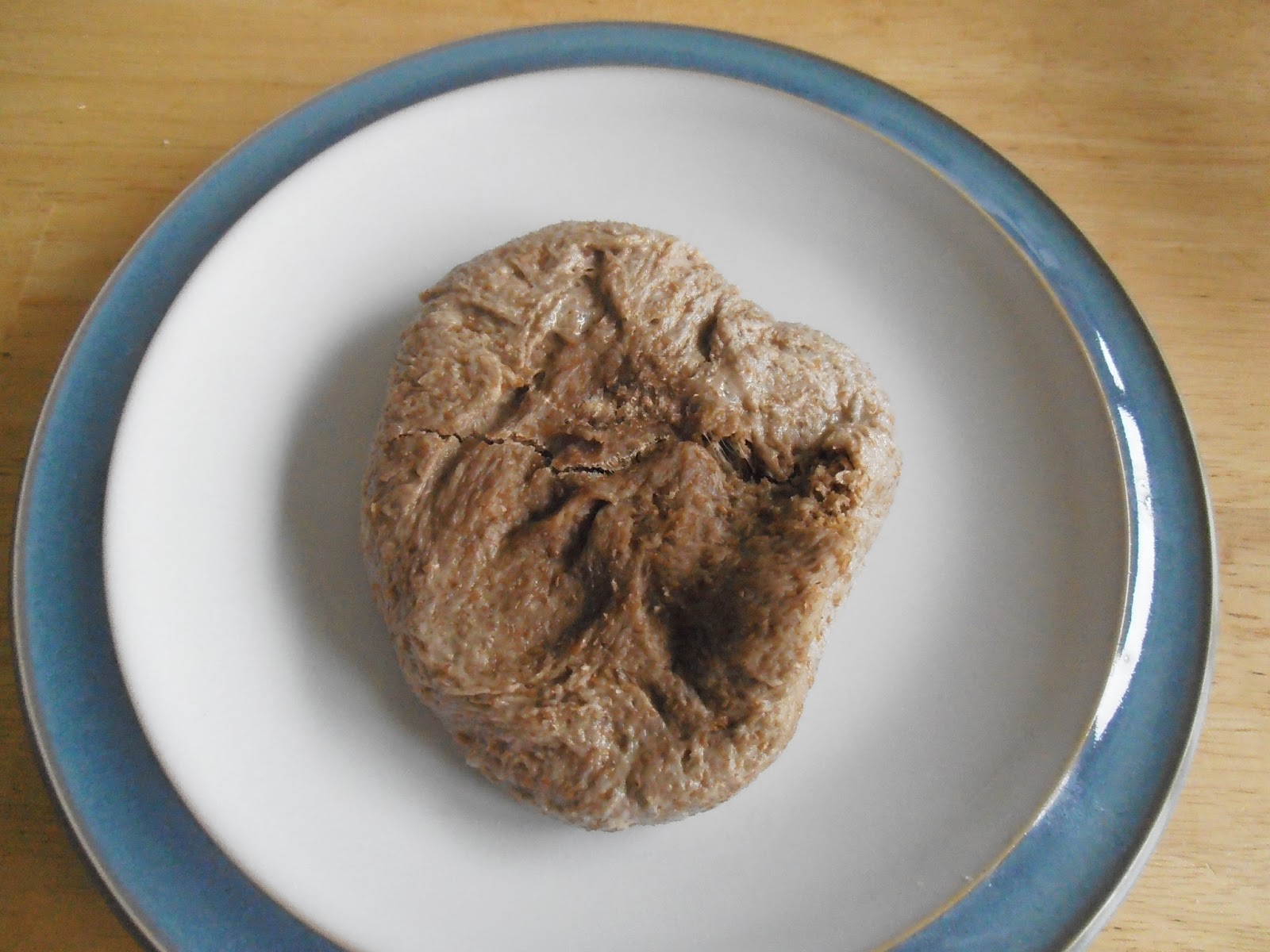 This is salted one and at first glance it looks healthier, a more natural flour colour and it didn't even smell that sour.  A closer glance shows that it had gone a bit hard in the middle but not bad.  It hadn't risen at all and it looked like a pretty nasty lump of dough. The box was very wet where the salt had drawn moisture out of the bread.  This pictures really don't show it well at all, but this one definitely looked dodgy.
I first rinsed off as much surface salt as possible and then followed the 17th century instructions.  I ripped the dough into small pieces, covered it with warm water and left the water to stand.  A couple of hours later I strained the water and used it to make the bread.  I used 1lb of flour, 1 tsp of sugar but no salt.

I left both sets of dough to rise overnight.  It will probably come as no great surprise that the salted dough did not rise at all, not even a small amount.  The salt had completely killed the yeast, even though it had stopped the dough going bad in storage.  The fridge batch had risen quite well.

I mixed some instant action yeast into the flat dough, left them to prove in the tins and then baked them.

They were both slow to rise but they came out of the oven looking remarkably similar, there really was nothing to choose between them and more importantly they tasted pretty much the same as well.  I would really have struggled to tell them apart, both had a subtle, sour flavour.  Same result in flavour but one was a good, if slow, way of raising the bread, the other just added flavour.

A more interesting experiment that would take some years to do is Markhams recipe for course, brown bread for servants.  This recipe is a mix of  flours from different cereals and peas.  He says to make especially sure to use boiling water to mix the dough as this stops the peas making the bread taste rancid and then he says to mix it and leave it in your sour trough over night.  I am assuming that using the same wooden trough (and it must have been large for the quantities he was using) would have built up a yeast culture all of its own.  He adds that if your trough is not sour enough then you can add some leaven or let it lie longer in the trough.

I am now going to be on the look out for people who have tried this.  Any method that involves not washing all your equipment in antibacterial washing up liquid (which would kill the yeast) would not make the Environmental Health Department happy so I have to be a bit careful, still one day....