When I planted this small parsnip look-a-like veg last year I thought I was indulging in some unusual gardening by planting something old-fashioned and interesting. Since then my veg box scheme have planted some for general sale next year and my sister tells me that her local supermarket in Leeds sells the stuff. So it may no longer be all that rare but it did fulfil my criteria of letting me try a taste of the past.

The earliest reference to salsify that I have found (and no I haven't looked very far before anyone asks) is in John Evelyn's Acetaria written in 1699.
Viper-graſs, Tragopogon, Scorzonera, Salſifex, &c. tho' Medicinal, and excellent againſt the Palpitation of the Heart, Faintings, Obſtruction of the Bowels, &c. are beſides a very ſweet and pleaſant Sallet; being laid to ſoak out the bitterneſs, then peel'd, may be eaten raw, or Condited; but beſt of all ſtew'd with Marrow, Spice, Wine, &c. as Artichoak, Skirrets, &c. ſliced or whole. They likewiſe may bake, fry, or boil them; a more excellent Root there is hardly growing.

More recently I have found growing instructions in Joy Larkham's veg growing book and in the pages of the before mentioned veg box scheme's cook book and I have to admit that one of the reasons I chose this particular veg to experiment with was that I could easily buy the seeds in the local garden centre.

Growing
As parsnip. Plant seeds in well hoed soil early in the year and leave them to get on with it until at least October. Leave in the ground until you are ready to eat them. The leaves are long and thin, the roots likewise. 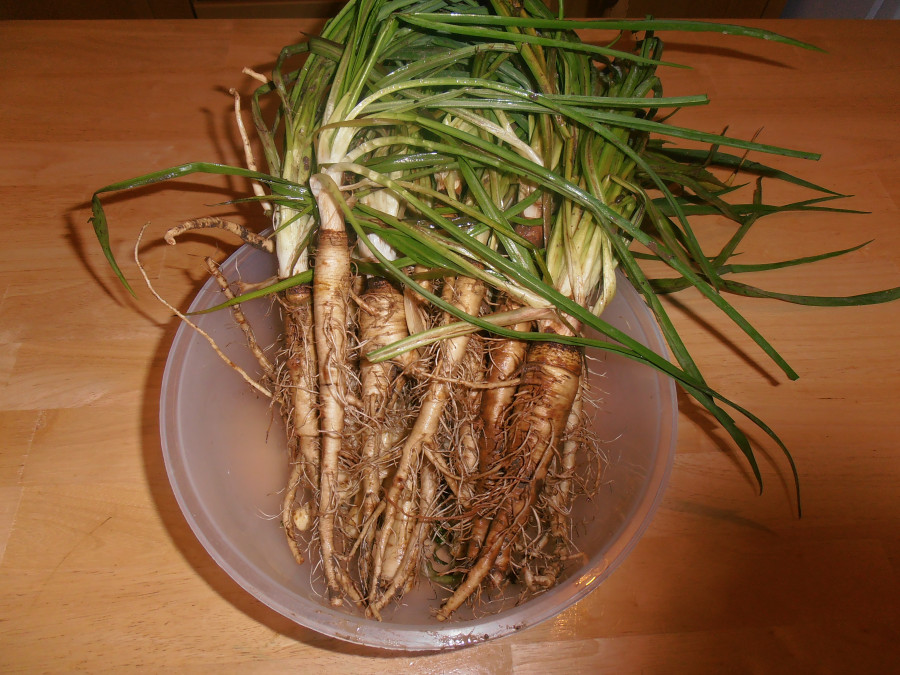 These are the ones that came up straight and useful. About the same number had obviously not been in well prepared ground and came up forked and twisted.

Preparing
First of all I tried Evelyn's suggestion for eating it raw. I soaked 4 roots for 24 hours, changing the water after 12 hours. My plan was to try one root every day until I found out how long it took to soak out the bitterness. After the first 24 hours I couldn't detect any bitterness at all and neither could my husband, who is one of those people who always eats their veg raw if they can, so we went ahead and ate them.

Modern sources describe the flavour as delicate and they would be right. My husband thought it had a slight parsnip flavour, I thought is tasted most like water chestnut. Raw, it certainly has a texture and bite like water chestnut and that slight metallic zingyness I associate with them.

Then I boiled 3 in their skins. Modern recipes say that the sap they give off can make them stick to the pan when boiled and that the skin comes away easily once they are cooked. I boiled them and tested with a knife until they were at what I thought was an al-dente stage. That was about ten minutes for finger thick roots. Turns out this was way too long as the roots were impossible to peel and very soggy. However boiling had reduced the metallic edge (I wonder if that was what Evelyn meant by bitterness) and enhanced the flavour a little.

Lastly I peeled and thinly sliced the last 4 or 5 roots and fried them with some leeks and chorizo as recommended in a modern recipe. I fried them for quite a long time, until nice and crispy and served sprinkled on top of lamb. Now this tasted really nice. Chorizo and salsify work well together. It is also possible to eat the young leaves of the 2 year old plant but unfortunately I had to dig up all my roots so I can't tell you about that for at least another year.

So why grow salsify?
It was in the ground for a long time and was not once bothered by slugs! I put the seeds in and off they went. It is slow to germinate but once it's up it seemed to be pretty hardy. Also you can leave it in the ground until you need it, all winter, a great consideration in the past. It might not taste of very much but it adds valuable diversity to the diet and the garden. If you lived in a time before supermarkets and freezers you needed to make sure that if one crop failed due to long wet summers or a plague of slugs then you had lots of other food to fall back on.