Once you start looking at old recipes for preserves you start to think that very little has changed.  By the 1600s every recipes follows the 1lb of fruit to 1lb of sugar format that you would expect.  Mustard recipes given in 1699 are virtually identical to ones you find on the internet today (but do suggest using a cannon ball to crush the seeds which is something so cool I have to keep mentioning it) and I have a recipe for chutney (or compost as they liked to call it) from the 14th century that would hold its own today.  However, when I started to make the marmalade recipes they do differ quite a lot.

Delia Smith's marmalade recipe uses 2lbs of sugar to one lb of fruit.  The fruit is peeled and the peel is boiled in the juice and water until soft.  Sugar is added and the mix boiled rapidly until setting point is reached.  This gives a medium dark, rich marmalade with a distinctive bitter taste that we recognise today as real marmalade.  The 17th century seemed to prefer something much lighter, fruitier and sweeter.  I have tried recipes from Elinor Fettiplace, writing in 1604 and Hannah Wolley, writing in 1660's. 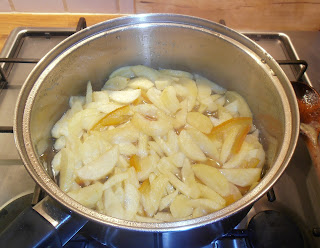 The first difference you see is in the bitterness, where we love it and wait especially for the January Seville season to make our marmalade, they went to lengths to avoid it.  Peel your oranges and boil the skin in several changes of water until the skin is soft and the bitterness is gone.

Second difference, apples!  Both ladies use sliced apples or pippins in their recipes.  This serves two purposes, it adds to the bulk of the preserve and it adds much needed pectin.  Most of the pectin is in the skin and pips of the orange, if you remove these by changing the water then you need to get your setting agent from somewhere else.

As you can see from the picture above you end up with a lot of apple to not that much orange rind. 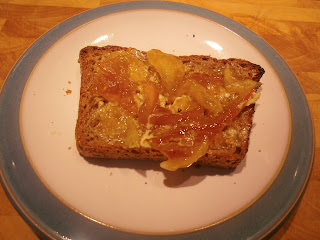 Third difference, FRUIT!  Whereas modern marmalade can be described as jam with a bit of fruit it, with these recipes I ended up packing the fruit into the jars as tightly as possible to eek out the small amount of jam syrup that was left.  What you get is a preserved fruit, large chunks of orangey fruit in a very sticky jam. 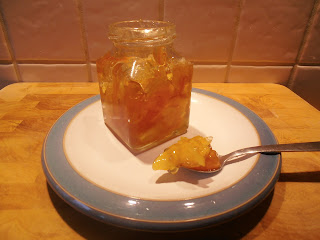 The fruit holds its shape very well but as my husband pointed out you don't so much spread it on your toast as arrange it as best you can.  Using fresh, hot toast does help. 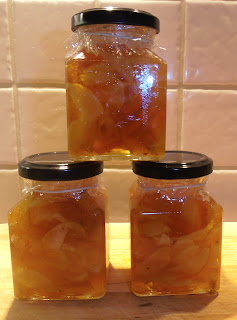 1lb of apples and 3 large oranges made 3 fairly small (7oz) jars of jam.  In terms of selling it, that works out at about £2 a jar if you include the price of the jar as well. 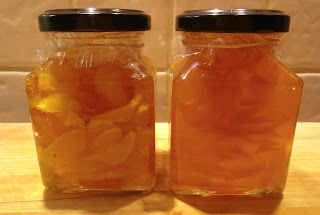 On the left is the 17th century marmalade and on the right is the modern one.  Taste wise Lady Fettiplace's preserve is delicately flavoured.  The orange taste is light and sweet with only a hint of bitterness left (I probably should have changed the water more often).  The apple and orange peel holds it shape very well and provides a little texture to the jam.  Overall, it is a very pleasant addition to the breakfast table.  My family don't actually like my usual marmalade, they say it is too strong, I say, "all the more for those that do," and carry on making it just for me.  They do like this version though.  They tell me that it is not too strong and is much nicer.  Looks like I will have some competition for these jars.