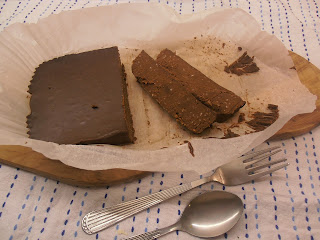 When I was young I never really understood all the fuss about Christmas food.  Mince pies were OK but the pudding and cake were awful.  I didn't like the dried fruit, the funny spices, the thick, sickly icing or the cream.  To me Christmas dinner was one big roast dinner with the unwanted addition of smelly, mini-cabbage and dodgy looking beige gloop on the side.  Don't even get me started on trifle!

Then one day my Mum bought Delia Smith's Christmas cook book and my outlook on Christmas changed forever.  Interesting starters appeared and on Christmas Eve and Boxing Day there was chocolate puddings.  First up was the Squidgy Chocolate Log and then there was the Chocolate Truffle Torte.  Oh my goodness, I was in utter heaven.  Best of all there were leftovers for days.

Fast forward a few year and it slowly dawns on me that the reason I grew up not likely anything with milk in was because milk disagrees with me.  However my Mum was not having me grow up with rickets and growing old with brittle bones.  Close on two decades of compulsory dairy products has left me with a learnt love of cream teas and a deep, psychological need to always have cheese in the fridge.

Sure, truffle torte made my stomach sound like a bubbling kettle but it was worth it for the shear heavenly taste.  Then I had kids and it is very obvious that they seem to be having issues with milk too.  I can't play fast and loose with their digestion and so I needed a dairy free alternative to my favourite Christmas treat and I needed it fast.  This is the result, a mix of chocolate, coconut and rum.  It doesn't have the depth as the Delia recipe but give me time and a few more tries and I will manage it.  In the meantime, please try this recipe and let me know how it goes, I think it is very nice indeed, if a little rich.

200g dark chocolate (I use the really cheap, supermarket versions, feel free to be more generous)
100g creamed coconut block,
80 g boiling water
1 dessert spoon of run (or other favourite alcohol.  Or use a teaspoon of flavouring)
1 grated orange rind.
Melt the chocolate in a bowl over boiling water
Finely chopped the creamed coconut
Mix the creamed coconut with the boiling water and stir well until you get a creamy paste
Stir in the orange rind and the flavouring (if using)
Stir the cocnut mix into the chocolate, mix well
Pour or spoon into a a suitable container.  You can use just about any heat proof container for this.
Leave to too and then pop in the fridge to finish off

This cools to quite a solid dessert.  I am experimenting with using a little more water each time, an extra 10g, until I get a more creamy finish to the dessert.  At the moment it is like a chocolate bar left in a warm room.

Hello,
This week I am having a try at low carb food.  (anyone who saw me eating cake lat night was imagining things :-)).  It isn't easy to reduce the amount of carbs in your life, or at least it certainly isn't cheap.

First of all, by carbs I mean the easily digested stuff that basically turns into sugar the nanosecond it hits your system.  White bread, white rice, white pasta, instant style oats, the highly processed stuff.  The carbohydrate in whole grains, seeds and nuts is all fine as the stuff you get in vegetables and most fruit.

That said there is a hierarchy of veg and fruit as well, some contains more sugar than others but at the moment, as I sit here craving a  slice of toast and marmalade like my life depends upon it I am not going to get hung up about the relative health levels of vegetables.  All veg is good, compared to a chip butty, it is all virtuous and brilliant, let us not split hairs.

Today's recipe is cauliflower rice with "stuff".  I had tried cauliflower rice before and had been unimpressed by the soggy yuckiness of it all.  This recipe is a mix of several I have found plus some of my own tweaking.  I promise lots of flavour and not a soggy spoon of veg in sight.

1 large cauliflower
1 - 2 (or even 3 onions)
some vegetables - I used a handful of green beans and a couple of carrots cut quite small.
1 tablespoon olive oil
spices to taste

I used Ras Al Hanout from Tesco which was lovely.  I think it would work really well with just about of your favourite flavours.

Cut the cauliflower up into quite small chunks and use a food processor to turn them into "rice."
Spread on a baking sheet with plenty of space, a deep edge would be good.
Chop and fry the onion.
Depending on your spice you might want to add it now.  Most spices taste better cooked.  The ras-al-hanout was better sprinkled over at the end.
Add the other veg, cover the pan and gently saute.
Turn on oven to 180.
When veg are nearly cooked add htem to the cauliflower.  Stir well with a fork to get the rice nicely coated in the oil and spices.
Bake in the oven, uncovered for 15 minutes.  Check after ten, you might will probably want to stir it around so it cooks evenly.

I sprinkled the spice on when it came out of the oven.
Enjoy

Email ThisBlogThis!Share to TwitterShare to FacebookShare to Pinterest
Labels: low carb food ideas, Meat Free Mondays, What can I make for dinner tonight?

These little treats are chewy, sweet and easy to make.  They are also made without flour so are gluten free. 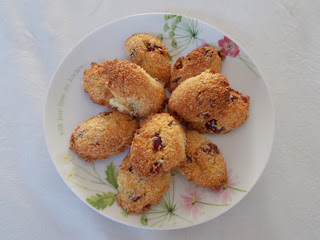 Chop the cherries, beat the eggs and mix all 4 ingredients together.
Oil a baking sheet
Use two large teaspoons to make neat dollops of mixture on the tray.  This mix is wet and sticky but does hold its shape well when baked.
Bake at 180 degrees C of 15 minutes.
Allow to cool slightly before moving onto a cooling rack.  This gives them time to firm up a little, if moved while hot they are more likely to break.
Posted by Unknown at 04:23 No comments: