The very first time I tried sweet potato was at a Thanksgiving dinner hosted by friends in Newcastle.  They baked it with sugar and cinnamon and topped it off with mini marshmallows.  They served it right next to the turkey and potatoes as part of the main course.  Then they sat back and played an amusing game of watching the English woman be really polite and try and eat it.  It wasn't that I didn't like their sweet potato dish, it was just that it needed to be in a bowl of its own and served with a good dollop of cream.

I am telling you this so all forgive me for cheating in my latest experiment and intentionally leaving out the sugar.  Not only did I know that I wouldn't like it with extra sugar added but also I wanted to feed it my children for dinner and they don't need any more sugar in their diet.

So, buttered sweet potato, another recipe from the ever reliable Elinor Fettiplace's Receipt Book.  By 1604, the date at the start of her book, the potato had arrived in Britain but it was the sweet potato that people were eating.  Elinor suggests that this mix of potato, sugar, orange peel, orange juice, butter and rosewater can either be boiled or baked in a pie crust.  I baked mine in a dish (not having time for pastry making today). 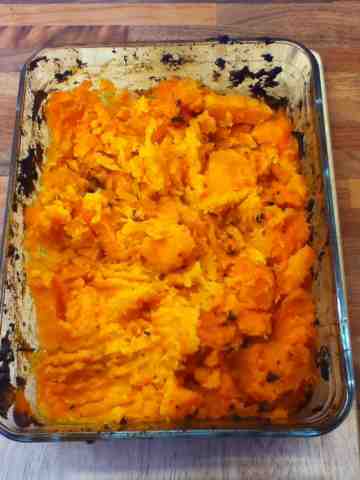 I have to say that this tasted lovely.  Not only will it be making a star appearance at my Forty Hall demonstration but will also be finding its way into our family menus as well.  The orange flavour worked so well with the sweet potato although I am not sure that I could taste the rosewater.  It is easy too, just needs a bit of planning.   Could easily be made in advance and reheated.

And as to the sugar?  Well, I think I will be making a version with sugar and serving it as a pudding in a sweet pastry case, topped with cream.

For 2 weeks now I have been trying to write a post about green pudding.  This is a funny little boiled cake recipe that I want to do at the Forty Hall demonstration.  It tastes nice or at least it will taste nicer next time with less nutmeg and more sugar.  It is easy to make and comes out a bright green colour.   The colour comes from spinach, and when I manage to grow some, marigolds as well.  This adds a little bit to the flavour.  What I like about the recipe is that boiling the cake means you can make them without an oven.  i might even try them next time I am camping.

Unfortunately, every time I try to load a picture to Blogger, it crashes my computer.  I have put the photo of the finished product up here:

So the main point of my post is to ask a question.  If you were going to a historical food demonstration would you rather taste the food exactly as the recipe states (as far this is possible), even though it is really horrible, or would you rather have the flavours toned down and balanced for a modern palate so you can actually eat it?
Posted by Unknown at 13:06 No comments: