This evening I am making crumpets.  Two reasons really, I need some pictures to advertise a course I am running that features, you guessed it, crumpets and also because sometime soon I am going to have a go at a gluten free version.  If anyone has made gluten free crumpets and would like to save me the effort of working out if it is possible, then please do get in touch.  What this blog is sadly lacking is links to other people.  A lone voice is never that effective.

So anyway, crumpets!  I love them.  Writing this has made me question exactly they I like them so much and I think the answer is because they are the bread that gives maximum honey absorption.  Scones are good for cream and jam.  The thickness of the dough and low sugar and fat content makes them a perfect partner for the calorie laden topping.  Honey though just drips off most things.  It is only the wonderful crumpet with all its holes that allows the honey to really shine.  Crumpets also contain no added fat and only a tiny pinch of sugar to start the yeast.  They are all white flour and milk.  If you made them with wholemeal flour they would be down right healthy. 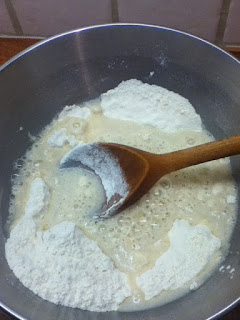 Mix the two flours together in a bowl
Mix the yeast and sugar into the warm milk and stir well. 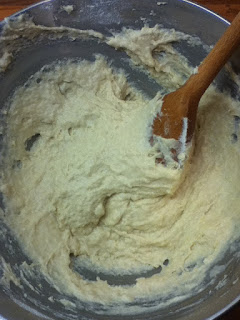 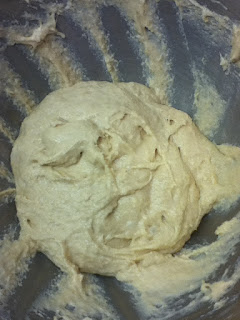 Until you have a nice, smooth dough.  Warning, it takes a lot of hard work to stir this dough.  You really need to persevere to make sure the gluten is well developed.  Dare I say it, but a mixer of some sort would be useful for people who find stirring a struggle.

Cover with cling film and leave to rise for about 1 hour or until it is well risen.  If it shows signs of deflating again then so much the better. 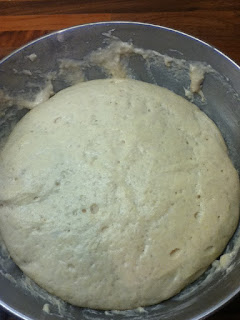 Dissolve the bicarbonate of soda into the terpid water.
You might not need to use it all so make sure that the bicarb isn't all at the bottom.
Slowly add and stir until you have a thick pouring batter. 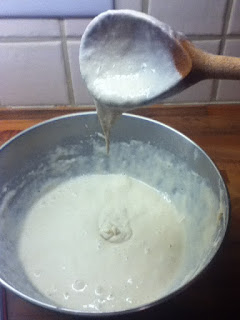 Leave the batter again, this time for about 20 minutes.
As you can see from the picture below, it has gone all bubbly.  This is what we are looking for.  At this stage you want to get going as the bicarb will only last so long. 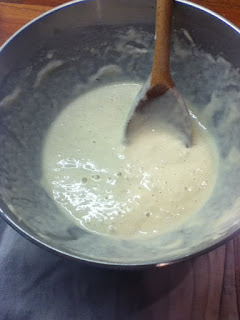 Grease a griddle pan or large frying pan and also lightly grease some crumpet rings.  I find that 4 is about all my large griddle can take.

Heat up but only to a low setting.  Crumpets are better cooked slowly.

Spoon crumpet mix into each one.  Only fill them about half full. As you can see from the next two pictures,  as the bubbles develop, the mix rises up and expands.

Also, slightly thinner crumpets are easier to cook through. 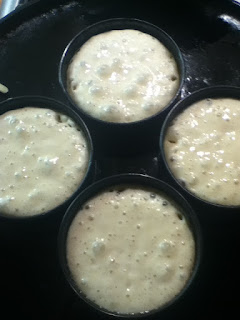 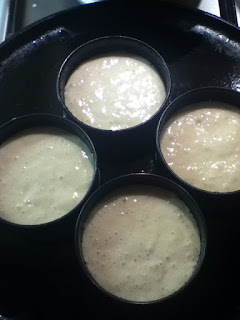 The crumpets are cooked then the top is very nearly set and the bubbles stay open.  It can take quite a few minutes to reach this stage.  If all has gone well then by now (the top one in the picture below) you should be able to gently slide the crumpet around and also remove the ring (with tongs!)

Remove the ring and flip over the crumpet.

They benefit from cooking for another minute or two on the other side.

You can either eat them straight away or reheat them by popping them under the grill.

Home made crumpets will taste slightly crispy on the outside while being softer and fluffier on the inside.  Enjoy and let me know if you try to make them. 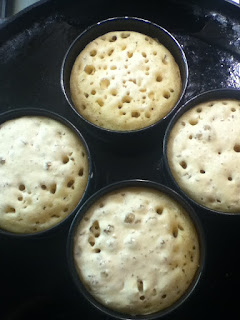 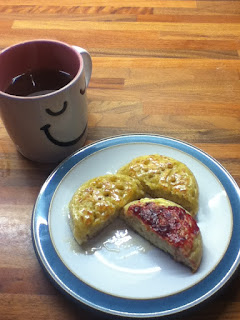 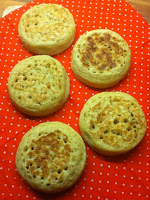