Every few months I get a request for gluten free baking.  It doesn't happen very often but it is getting more frequent.  So I thought it was time for a proper look at GF bread.

Last year I had some GF relatives staying and I made them Doves Farm Brown Bread Mix which I must say made a very good loaf of bread, once I had tweaked the recipe a little.  Unfortunately I wasn't in a planning ahead sort of mood and I didn't take any pictures.
This year I have someone on a bread course who needs GF bread.  It would be a bit embarrassing to serve something out of a supermarket packet and so I have been trying out some different packets of bread mix to see what happens. 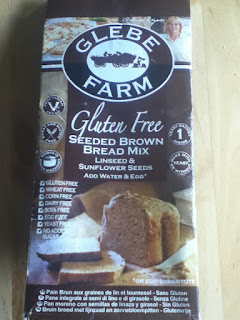 Today was the turn of Glebe Farm.

(My review is intentionally a bit picky because I want it to be useful to other people.  Overall I would say that I like this product and would recommend it to other people.)

The first time I make any recipe I do actually follow the instructions.  Admittedly I usually then alter them a lot and it is pretty rare that I don't make some minor changes.  Actually most people should take a closer look at all recipe times and temperatures if nothing else as all oven vary.  Making small experiments could radically alter the quality of your baking.

What I want to say is that I followed the recipe on the back of the packet.  It makes a thick but runny batter that is a bit prone to lumpiness.  You do have to give it a really really good stir to get the lumps out.  The instructions say to leave to rise for 20 minutes before cooking. 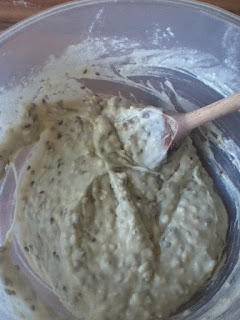 After 20 minutes mine had done nothing.  (I put a small pencil mark on the lining paper to check this.)  In the end I left it for about an hour and half (due to school run) and it had rise about 1 inch.
At this point I popped it in the oven for the 25 minutes recommended.  When it came out the tap on the bottom sounded a bit "damp" so I popped it back in for another 5 minutes without the tin. 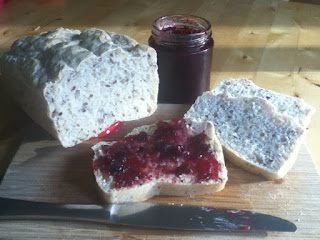 I hope that from the photo you can see that it has a lovely, open texture.  It is definitely light and airy The crust is quite good, although a bit crackled.  This certainly does not detract from the overall quality of the bread.

Flavour wise it does taste a bit strange on its own.  It also has a noticeable aroma, nothing bad, just not what I am used to as a bread smell.  However, once you have added jam (blackcurrant in this case)  it tastes just fine.  I have also tried it with my favourite oil and salt dipping mix and it did well.

Overall, if I had to give up real bread tomorrow then I would be happy to live on this as a substitute and it tastes far better than any GF bread product I have tasted from a supermarket packet.  It was easy to make and the only change I would make to the packet instructions would be to add that you might need longer for the bread to rise depending on the temperature of your kitchen.

My family really enjoyed this for breakfast this morning and it made very good toast.
Glebe Farm can be contacted via their website which is:
http://www.glebefarmfoods.co.uk/